For the first time, in a single location, two local survivors who have recently published their memoirs and philosophies, will present elements of their stories and be available for discussion and book signings.

Forty-one percent of Americans haven't heard of Auschwitz. Twenty-two percent of millennials haven't heard of the Holocaust. Anti-Semitism is alive and well, and acts of mass violence are on the rise. Hear for yourself these remarkable stories from survivors who have dedicated themselves to educating students and adults on the facts and impact of the Holocaust in an effort to have the world “Never Forget“ and its corollary “Never Again”.

To remember the Holocaust is to remember a single, monstrous crime-the mass murder of six million Jews. This traditional approach to commemoration somehow anonymizes the victims, stripping them of their identities-just as the Nazis intended. Instead we should understand and remember each individual atrocity. Understand the victims as individuals and as individual crimes. Only then can we truly understand, remember, and learn. Survivors and eyewitnesses are dying out.

Fanny will recount parts of her inspirational and emotional story and her observations on the human condition. Only 1.25 percent of Latvian Jews survived the Holocaust Fanny experienced the trauma of the Libau ghetto and five Nazi concentration camps. Upon liberation, she weighed fifty-nine pounds, was desperately ill with typhus, and had not a single worldly material possession. What enables a beautiful nurse to survive these horrors and then pursue a fulfilling life going on to post-war work with the United Nations Relief and Rehabilitation Administration (UNRRA) and at the World Jewish Congress in Stockholm (lobbying for the formation of a Jewish homeland) and then raising an adoring family while in business in South Africa and influencing multiple generations of her family after immigrating to the United States? 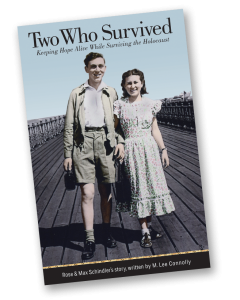 Rose Schindler (1929-) Born and raised in Czechoslovakia, was deported to Auschwitz along with her parens, aunt, five sisters and two brothers when she was just 14 years old. As one capable of giving a first-hand account of the horror of the Holocaust, she remains steadfast and determined to offer the incomparable opportunity to meet a survivor. Her husband of 67 years, Max Schindler of blessed memory (1929-1987) Born and raised in Germany spent three years in six concentration camps. When they were finally liberated from their concentration camps, they navigated a new world individually before finding each other to form what each so tragically lost: a family. Rose and Max's new memoir, Two Who Survived; Keeping Hope Alive While Surviving the Holocaust was written by M. Lee Connolly.

Our goals cannot be achieved without your generous help. Please do what you can to make a tax-deductible donation today.